Copyright: © 2015 Amlang CJ, et al. This is an open-access article distributed under the terms of the Creative Commons Attribution License, which permits unrestricted use, distribution, and reproduction in any medium, provided the original author and source are credited.

Background: Pfeiffer syndrome is a rare disorder characterized by craniosynostosis, broad thumbs, big toes and partial syndactyly of the hands and feet. It may also be associated with respiratory, ocular, otologic or neurologic problems that can complicate treatment. Raised intracranial pressure in Pfeiffer syndrome has been attributed to an array of physiopathologic mechanisms.

Methods: Single case report of a young man with a Pfeiffer-like syndrome presenting with severe headaches and progressive visual loss found to have high-normal to elevated intracranial pressure.

Results: Imaging studies showed a right internal jugular vein occlusion raising concerns as to whether venous sinus hypertension may have been involved in the increased intracranial pressure. However, the main concern in our patient was the appearance of bilateral disc edema and his sudden loss of vision. He presented a more severe optic atrophy and a complete loss of vision on the left eye, associated with a narrowing of the left optic canal in a subsequent CT scan.

Conclusion: Neurologists should be aware of Pfeiffer syndrome, a rare genetic disorder which may possibly lead to several and potentially serious neurological complications.

Pfeiffer syndrome is a rare disorder with an overall incidence of approximately 1/100,000. It was first described in 1964 as a syndrome characterized by craniosynostosis, broad thumbs, big toes, and partial syndactyly of hands and feet. Other associated symptoms include respiratory, ocular, otologic, and neurologic problems that can complicate its clinical course and treatment. Pfeiffer syndrome is typically caused by mutations in the fibroblast growth genes FGFR1 (chromosome 8p11.2-p11.4) or FGFR2 (chromosome 10q26.13) which can arise de novo or be inherited in an autosomal dominant fashion. We evaluated a young man with a Pfeiffer-like syndrome who presented with severe headaches and progressive visual loss. We review the neurological complications associated with this unusual disorder.

A 21-year-old man with history of craniosynostosis surgery at six weeks of age, broad thumbs, big toes, brachydactyly, acrocephaly, low-set ears and hypertelorism, began having headaches at the age of 10 (Figure 1). He was prescribed reading glasses which relieved his symptoms. Three years later, he complained of a “bulging” sensation on the top of his head, decreased vision and increasing headaches. Cerebrospinal fluid (CSF) analysis showed an opening pressure (OP) of 250 mm H2O, but was otherwise normal. A presumptive diagnosis of idiopathic intracranial hypertension (IIH) was entertained, and treatment with acetazolamide was started. At that time, the diagnosis of Pfeiffer syndrome was postulated. Genetic testing for FGFR2 gene mutations was negative and no other genetic screening tests were entertained. The diagnosis of probable Pfeiffer syndrome was made based on clinical criteria. Since his headaches persisted, he had cranial vault reconstruction surgery at the age of 16 with considerable improvement in the frequency and intensity of his headaches (Figure 1). Then, at age of 17, he presented with acute onset of painless visual loss of the left eye. He had first noticed “floaters” associated with phosphenes the night prior. The next morning, he could not see from his left eye. He had no other neurologic complaints. Ophthalmologic examination showed near complete loss of vision on the left eye except for light perception on the left superior quadrant. Funduscopy showed left optic nerve swelling with trace right optic nerve swelling and a left macular star (Figure 2). He received a brief course of intravenous corticosteroids under the impression of possible optic neuritis. His vision improved on steroids with decrease in the central scotoma and improvement of his peripheral visual field. He also developed bilateral fronto-temporal headaches. Brain MRI, MRA and MRV were unremarkable. CSF analysis showed an OP of 19 cm H2O and normal CSF composition. Subsequently, treatment with topiramate and acetazolamide was started. 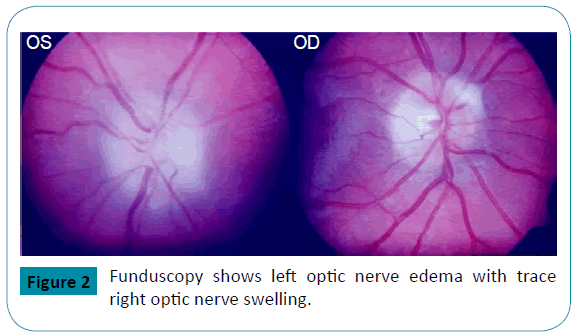 Since no definitive etiology for his monocular visual loss was found, he presented to our Neurology Clinic for the first time. The left eye visual deficit was still present. Visual acuity was 20/100 OS and 20/16 OD. Because family history was remarkable for a second cousin affected by Leber hereditary optic neuropathy (LHON), he had LHON mitochondrial genetic testing which was negative. CT venogram (CTV) of the extracranial and intracranial venous system showed a right internal jugular vein occlusion. A hypercoagulable profile was also normal. We considered the previous diagnosis of IIH as unlikely, and recommended discontinuation of acetazolamide. Nevertheless, he was still having transient, fleeting sharp headaches which improved with incremental doses of topiramate.

The patient was evaluated by several neuro-ophthalmologists who considered neuroretinitis, optic neuritis and macular damage, and an occluded right internal jugular vein as a possible putative mechanism of increased intracranial pressure (ICP). He then received treatment with rifampin and tetracycline for possible neuroretinitis.

Two years later, he again presented for worsening right eye pain and visual phosphenes. An ophthalmologic examination showed a normal right optic disc and a pale, flat left optic disc. CSF analysis showed an OP of 14 cm H2O with normal cell count, glucose and protein content. CT of the orbits showed abnormal narrowing of the majority of the left optic canal with a diameter of < 4mm (Figure 3). The right optic canal was of normal size. He received treatment with intravenous corticosteroids, and the dose of topiramate was further increased. 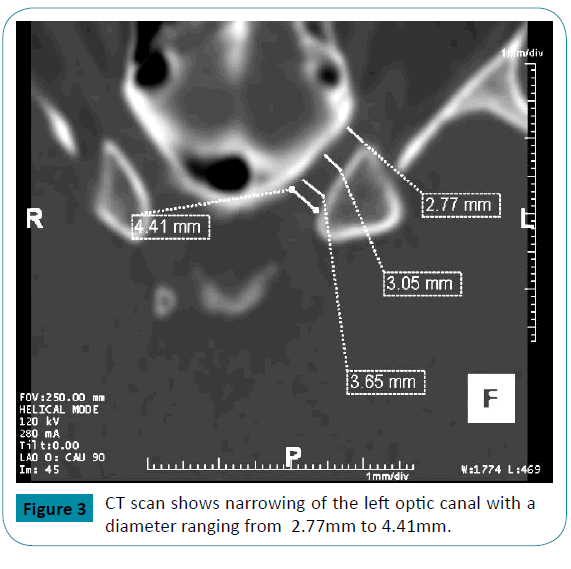 Figure 3 CT scan shows narrowing of the left optic canal with a diameter ranging from 2.77mm to 4.41mm.

His symptoms were thought to be caused by transient elevations in ICP, and an ICP monitor with bolt placement was preformed for three days. His ICP was observed to spike to 35-39 cm H2O with head movements.

In follow up, he continued to report experiencing brief and repetitive phosphenes noticeable on the right side of his visual fields,in addition to episodic fronto-temporal headaches, refractory to over the counter analgesics and topiramate. Examination showed bilateral disc pallor and optic atrophy more pronounced on the left than on the right. Visual acuity was 20/25 OD and 20/800 OS (Figure 4). 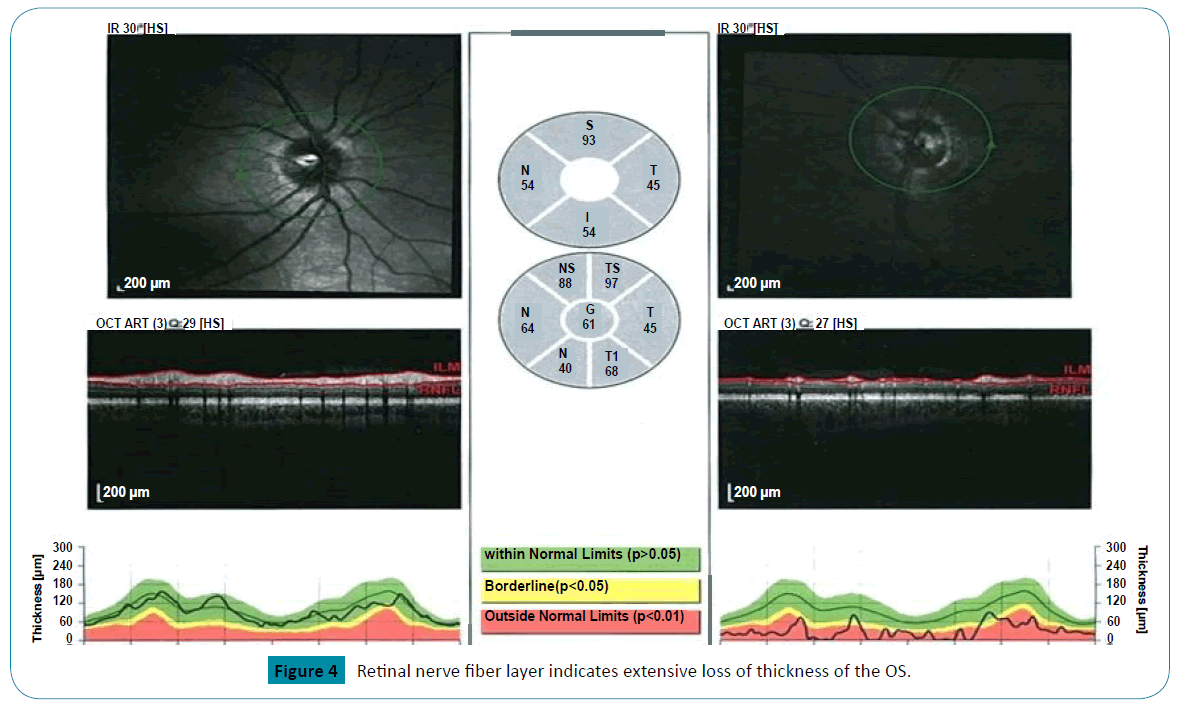 Our patient had a clinical picture resembling Pfeiffer syndrome type 1. Although his genetic testing was negative for mutations in the FGFR2 gene, approximately 5-10% of type 1 cases are associated with mutations in the FGFR1 gene which normally accounts for a milder phenotype as we suspect is the case with our patient [1]. While genetic testing for FGFR1 or genes associated with craniosynostosis syndromes including FGFR3, TWIST1, EFNB1, MSX2 and RAB23 [2] have not been entertained in our patient, he met clinical criteria for variant of Pfeiffer Syndrome [3,4]. Applying clinical criteria established by Naveh et al, our patient showed several clinical symptoms consistent with Pfeiffer Syndrome including acrocephaly, hypertelorism, low-set ears, vision defects, normal mental development, brachydactyly of the upper and lower limbs, and broad thumbs and large toes. Of note, patients with phenotypical features of Pfeiffer syndrome type 1 without identifiable mutations have been described [5,6].

Our patient had two cranial vault reconstructive surgeries, chronic headaches, and several CSF studies with ICP monitoring showing high normal to elevated ICP values without abnormalities on CT or MRI scans. Increased ICP and hydrocephalus may be present in 28-60% of Pfeiffer syndrome patients with an even higher prevalence for patients in type 2 and 3 [ 7 , 8 ] . Raised ICP in Pfeiffer syndrome has been attributed to different mechanisms: CSF outflow resistance due to constriction of the posterior fossa, decreased CSF resorption due to venous outflow obstruction, upper airway obstruction with obstructive sleep apnea, and impaired absorptive ability of arachnoid granulations [7,9,10]. Crowding of the posterior fossa and Chiari-like malformations with tonsillar herniation are potentially acquired complications in Pfeiffer syndrome resulting from a premature fusion of the lambdoid suture [11]. In fact, acquired Chiari malformations have been reported among 50-84% of patients with Pfeiffer syndrome, and almost always in type 2 and 3 patients [5]. Another explanation for increased ICP in Pfeiffer syndrome may be a deficient CSF resorption due to venous sinus hypertension [ 11 , 12 ]. Venous sinus hypertension has been described in other related craniosynostoses such as Crouzon’s or Apert’s syndrome, and is thought to be caused by a stenosis of the jugular foramina. In most of these patients who had progressive hydrocephalus, angiographic studies showed jugular foramina stenosis as well as extensive venous collateral networks. Moreover, elevated CSF pressure has been successfully normalized after bypass placement between the transverse sinus and the jugular vein [11]. Interestingly, our patient had a right internal jugular vein occlusion raising the question whether venous sinus hypertension may have been partly involved in the increased ICP. Respiratory complications and obstructive sleep apnea have also been implicated in the pathogenesis of elevated ICP in Pfeiffer syndrome and other craniosynostoses [9,13].These respiratory difficulties may result from several malformations of the upper airways associated with these syndromes [14]. Moreover, transient nocturnal episodes of elevated CSF pressure have been reported in Pfeiffer patients with upper airway obstruction during sleep [9,13].

The main concern in our patient was his history of visual disturbances. While onset of visual problems occurred rather late in our patient, ocular symptoms are common complications in Pfeiffer Syndrome and other craniosynostoses [15,16] and can have a profound influence on quality of life in affected patients [17]. Visual impairment is estimated to occur in approximately 40% of symptomatic craniosynostoses [18,19], while 50% of patients present with papilledema [ 20 ] . Early surgical intervention with cranial vault reconstruction seems to prevent the occurrence of papilledema. However, if present before surgery, the prevalence of papilledema is still approximately 40% one year after surgical intervention [20].Consequently, a multidisciplinary approach to patients with Pfeiffer syndrome should always include a thorough ophthalmologic evaluation [16,21].

Visual impairment and loss of vision are most frequently acquired. Optic neuropathy, corneal damage, amblyopia secondary to strabismus, refractory deficits post-surgery, or a combination of the above may lead to visual loss [16,22]. Gupta and colleagues observed a prevalence of 15% of optic atrophy among 33 children with craniosynostosis with an increased risk of optic nerve involvement in multi-suture craniosynostoses [22]. In a larger retrospective study, 35.5% of craniosynostosis patients were found to have bilateral, and 9.1% to have unilateral visual impairment principally caused by amblyopia (16.7%), ametropia (25%) and optic atrophy (16.7%) [19]. The most important risk factor for optic atrophy seems to be elevated ICP. Conversely, other putative mechanisms may be involved such as local changes or stenosis of the optic canal, kinking or stretching of the optic nerve or decreased blood supply to the optic nerves due to sudden changes in ICP[23]. This would explain the marked difference of optic nerves damage between both eyes in some patients, and the absence of recorded papilledema in patients with optic nerve changes in craniosynostosis. Interestingly, our patient demonstrated a clear difference of optic nerve changes bilaterally. He had a more severe optic atrophy and a complete loss of vision on the left eye associated with a narrowing of the left optic canal on the CT study that occurred late in his adolescence. A case study of 4 patients with craniosynostosis by Bartels and colleagues reported the occurrence of sudden irreversible visual loss in patients who did not have any other clinical symptoms besides papilledema [ 24 ] . Mean age of visual loss for these children was 34 months. Since all of them had undergone cranial vault decompression before the event, they had been considered not to be at risk for developing increased intracranial pressure. Although sudden visual loss occurred much later in life in our patient, the question remains as to whether his episodes of visual impairment were a late onset complication of Pfeiffer syndrome or a distinct phenomenon.

Neurologists should be aware of Pfeiffer syndrome, a rare genetic disorder which may possibly lead to several challenging neurological complications.